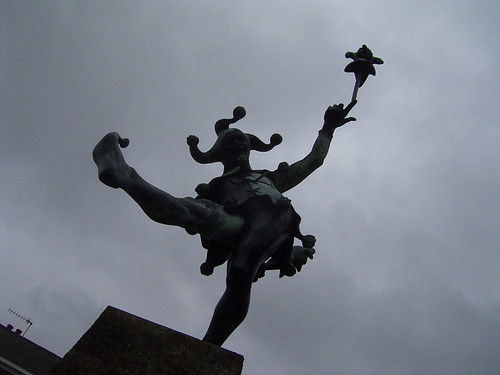 Trickster slips into the backseat of the car, invisible to the two little old ladies chattering incessantly in the front seat, his eyes like lasers penetrating into their minds, drilling down into their thoughts. Finding what he was searching for, a silent sigh of relief passes through his lips.

Trickster thinks, “Now that I have a ride to Woodland Park, I can prepare special pranks for these women.” Abruptly, the car starts up, leaving the driveway, leaving Colorado Springs, entering the highway to Woodland Park.

As day turned to night, halfway to their destination, the driver glances at the mirror in the car. She sees a red light throbbing like a heart beating rapidly, like her heart; she hears a wail coming closer, a wail that could have originated deep in her gut—a horror movie, unfolding.

With old age can come various fears, as possibly happened in this case–a routine police stop. When the driver recognizes this police-stop scenario and regains a bit of composure, she says to her friend, “I didn’t do anything wrong.”

Her friend replies, “Pull over, stop the car and roll down your window.”

The driver spurts, “You’re not the boss of me,” as she does what her friend suggested, although slowly, a frown forming on her face, turning into a scowl, the state patrol car’s headlights turning her into a frightening apparition.

When the police officer reaches the open window, startled, he steps backward, the apparition appearance of the driver accentuated by the light of his flashlight. Indignant at being pulled over, the driver snarls, “Why did you stop me? I always obey the law. I wasn’t speeding. I wasn’t going faster than that–pointing to a road sign.”

Dryly, the officer replies, “No, Ma’am, you weren’t speeding. However, the sign reads, Highway 24, not 24 miles per hour.”

Story Analysis: While I’ve been told the last two lines of this story are true, I’ve taken literary license in embellishing the story, and making trickster a behind-the-scenes figure.

When trickster is slipping into the backseat of the car, symbolically (because he’s an archetype) he is hiding in the shadows of the driver’s unconscious mind (backseat), subtly influencing her thoughts and orchestrating her moods. He plays with her fears, ultimately making her an apparition in a horror show. Some prank. Oh yeah, and what about the road-sign joke.