Among Hawks
Dream a New Dream 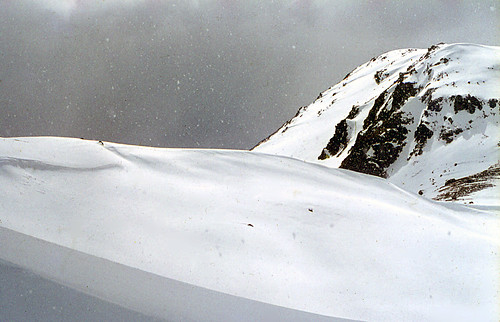 that encloses the mountain.

The sun is hidden

and only the silence

I wrote the spruce tree poem

Leslie Marmon Silko contrasts dark with light . . . black with white.  “Dark branches/dark leaves/snow deep . . . white sky.” At one level, the opposition between black and white is resolved in the grey . . . “the gray alder branches.” Note, however, the “green moss feathers that cling to the gray alder branches.”  New life . . . new growth is symbolized by the soft “green moss feathers.” Also, the green of spruce trees adds to this new-growth theme since green is the only vivid color in this stark landscape.

Notice that the sun and sky are hidden. Since mixing yellow and blue makes the color green, new growth struggles to be seen. The new growth is fragile; it clings to the gray branch. The sun being hidden in the green moss feathers signals hope. No cold, bleak storm can destroy new life, however fragile.

Reading the lines “snow deep, in sky” evokes an image of sky as a snow drift encircling the mountain. This encirclement by snow leads to the mountain’s disappearance. In the theory of color as light, white light encompasses all of the colors of the spectrum. “The snow winds came and the mountain was gone” symbolizes enlightenment. In the tenth and final Zen-oxherding picture of Pu-ming, there is an empty circle entitled “Both Vanished.” Both the seeker/sage and the ox vanish. Only silence remains. And in the center of the silence, we dance . . . free.

Among Hawks
Dream a New Dream